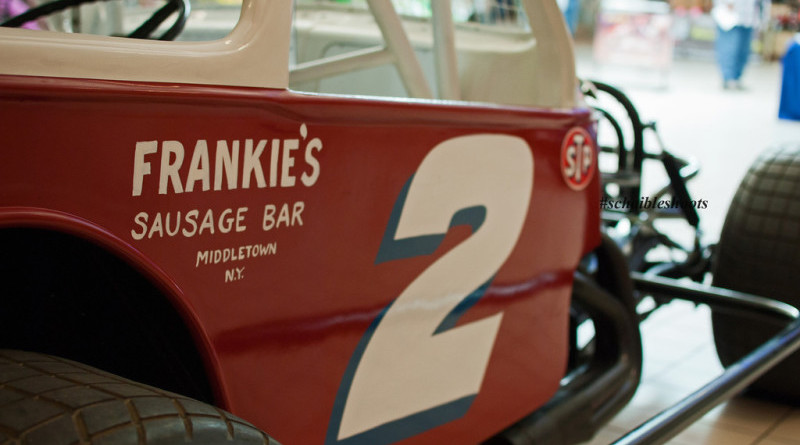 The Quaker Steak & Lube Ninth Annual Dirt Track Heroes Show completed the sixth day of the week long journey into the past, present and future of auto racing for the racing community and will head into the finale on Saturday, March 12th with a tribute slated for “The Polish Prince” Stan “The Man” Ploski through the efforts of the Dirt Track Heroes Staff and the Flemington Speedway Racing Historical Society. The Friday event highlighted a tremendous two show day that lasted right up until the Mall closed for the evening. The ninth annual edition of the show will continue through March 12th. The Friday shows were provided sponsorship by Premio Foods, Penn Jersey Food Marts, Martocci Automotive, Carl’s Auto Repair and Dean Autosports. Premio Foods will sponsor the Saturday event and will have their food wagon on premises offering samples of their fine products as well as handouts for the attendees to the Mall.

With the eclectic Quaker Steak & Lube Restaurants the lead sponsor of the event, the excitement and the pulse for the week long show quickens with each day as the diverse schedule of the week long show offers a bit of everything to all racing fans. The 65 stores making up Quaker Steak & Lube annually sell more than 80 million wings per year and “The Lube” is recognized as “The best wings in the USA.” The Phillipsburg location has also been dubbed “The Official Restaurant of the Dirt Track Heroes” show. To contact the restaurant, call: 908 454 2900 or check out their website at: www.thelube.com Before or after the show head to Quaker Steak & Lube and get recharged and refueled in a great sports setting. Request a table underneath the Bob Pickell number 300 Modified for an additional racing experience.

An amazing group of sponsors have supported the show with sponsorship through Quaker Steak & Lube, IRCO, Smith Fabrications/Stage One Modifieds, Martocci’s Automotive, Hamlin Speedway/S&S Speedways, Premio Foods, Searock Fabrications and Speed Supplies, Alex’s Tire/Breidinger’s Speed Shop, R&F International Muffler and Brake, Murante Auto Repair, Penn Jersey Super Markets, Dean Autosports and Carl’s Auto Repair. Nightly interviews and 126 race cars provide the race fan a full appetite of racing fun before the 2016 racing season begins. The Phillipsburg Mall, located on Route 22 East in Phillipsburg, NJ, has proven to be a popular setting for this special event and offers a multitude of race cars, racing memorabilia, collectibles and photos on display throughout the course of the show. The show continues to be FREE of charge to the mall traffic and the 2016 edition of the show is the trend setter of the many shows that are scheduled during the year. Emcees Ed and Steve Pados opened the show and introduced IRCO Vice President Greg Collins to the crowd. Collins once thanked the local racing community for their support and talked of the various offerings from the IRCO group and once again thanked everyone for their continuous support of the annual event.

Ed and Steve Pados along with Bobby Stull and Justin Beltrame were honored to interview a great panel of driving legends from the local area and beyond during the first show. The show played to a full house and in roundtable fashion to allow the fans to connect with the drivers they cheered for when they dominated the local speedway scene and they came out to salute the legendary “Old Master” Frankie Schneider. Gerald Chamberlain, Ronnie Dunstan, Gary Gollub, Earl Derr, Alan Carter, Bruce Young, Ken Brenn Jr, Newt Hartman, Wyatt Jacobus, Nate Strunk, Tommy Vroom, Ray Liss, Jay and Jim Stong, Ricky Rutt, Ron Masters and Rusty Smith were onboard for one of the best shows ever in the history of the nine year old show. The question and answer period brought many great responses from the drivers and is a lasting memory to their exploits on the speedway. Mark Harrington and Larry High were on hand from the Flemington Historical Society to give Frankie Schneider the Pioneer Award for his many great years of entertaining the fans with his championship caliber of racing.

The great fan base of racing can come out to this grand Mall event and be transported back to a time when they could hop into their family jitney and travel less than a half hour to witness the excitement of a night at the races. All historical racing groups including Dorney Park, Reading, Flemington, Harmony through Greg Collins, Tri State, Friends of Nazareth, Mike Ritter Photos, Big Mike’s Videos and Bob Snyder Photos and Snyder Video will have their memorabilia on display and their many scrapbooks open for the fans to take another long look at the glory years of racing and possibly find a picture or two they want to purchase as a keepsake from past glory or racing exploits. More information is available by calling: 443-513-4456.

The Quaker Steak & Lube Dirt Track Heroes Car Show has a must have event T-shirt done exclusively for the show, highlighting many of our racing heroes who have passed away in the past year. The great keepsake event souvenir program book has many great articles regarding our racing heroes. The Phillipsburg Mall is open Sunday 11 AM to 6 PM and from Monday through Saturday from 10 AM to 9 PM. The event offers race teams a great opportunity to promote their sponsors and announce their racing plans for the 2016 racing season.