In 2022, Thunder on the Hill will kick off its 33rd season having completed One-hundred-and-forty-five events and distributing over $5.2 million dollars to competitors in a variety of divisions, making Thunder on the Hill one of the most lucrative and diverse special event programs in the region.

To commemorate this historic milestone, Thunder on the Hill and Grandview Speedway along with series partners, teams, drivers, and fans will join together in a season-long celebration to mark the success of this wildly popular series that will include cornerstone Thunder events, as well as, added bonuses and surprises.

“Way back in 1990, Dave Kelly along with Bruce Rogers and myself, laid a foundation that today supports some of the region’s most prominent auto racing events,” said Series Promoter Bob Miller. “The story of Thunder on the Hill over the past three decades is fascinating, and one that I relish the opportunity to share. It’s also a story that wouldn’t be complete without the support of our loyal racing fans.

“We have secured many of our past and successful events and have a few more surprises up our sleeves for the 2022 season.”

Thunder on the Hill is pleased to announce that key sponsors like NAPA Auto Parts,  Levan Machine & Truck Equipment, and Pioneer Pole Buildings will be returning to be a part of the wildly popular racing series.

The idea for Thunder on the Hill dates back to 1990 when URC Champion Dave Kelly approached well-known racing publicist and official Bob Miller, with an idea to promote an open cockpit 410 Sprint Car event. Miller and Kelly’s conversations would lead to a meeting with Grandview Speedway owners Bruce and Theresa Rogers, who could bring the final piece to the puzzle, the perfect facility for such an event.

With everything in place, their attention quickly turned to making the event a success. With Grandview’s tight, tricky, and often wicked 1/3 mile oval providing the battlegrounds, there was some question if the central Pennsylvania sprint drivers would support the show. Kelly assured everyone that an attractive purse would be the key to bringing the sprint cars to Grandview Speedway. After digging deep into his pockets to post a healthy purse, Bob Miller needed to bring his dedication to the table and make sure that the fans would fill the Grandview bleachers.

Miller was insistent that the event should have a name to separate it from the rest. “Thunder” would appropriately describe the sound of sprint car engines, but how could they include Grandview, the hosting track that sits “on the hill” in Bechtelsville, PA in the event’s name – and at that time, Thunder on the Hill was born.

From 1990 through October 2021, Thunder on the Hill has presented a total of 145 events that paid out over $5.2 million dollars. From the 410 sprints to the World of Outlaws, All Stars, CRA, SCRA and USAC Wingless Sprints, URC Sprints, KARS Sprints, ROC Modifieds, DIRTCar Modifieds, Sportsman, Legends, Late Models, NASCAR Modifieds, World of Outlaws Late Models, ARDC Midgets and Mini-Sprints, Thunder on the Hill has expanded to offer plenty of variety for every race fan.

Thunder on the Hill will present its’ 33rd season in 2022, with a continued effort of making a difference to pleasing the all-important race fans and competitors. Be sure to provide your thoughts and opinions since they are a very important step in building future Thunder on the Hill racing events. E-mail all comments to TOTHill98@aol.com.

“Bruce was a fair and honest person and without a doubt, one of the influential people in my life. Honesty, integrity, and confidence are the key assets I’ve seen in Bruce Rogers, a friend first and my partner in Thunder on the Hill, second. We dedicate the Thunder Series to the memory of Bruce Rogers,” said Bob Miller, Thunder on the Hill Co-Promoter. 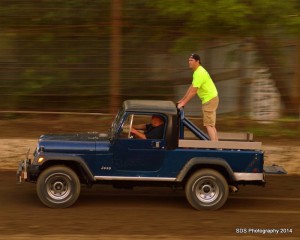 Thunder on the Hill events are always jam packed with the popular promotions including: