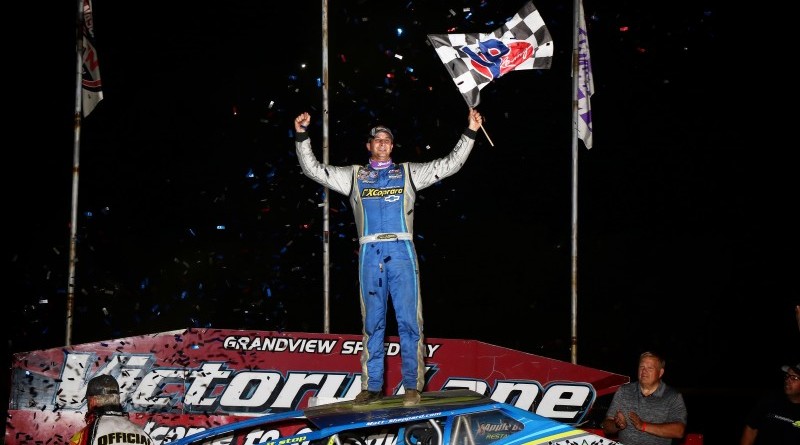 After drawing the pole, Sheppard launched from his first row starting spot with Unadilla, NY’s Billy Decker following closely behind in the Page Trucking No. 91 machine. Sheppard set a rapid pace from the onset hitting lapped traffic by the fourth circuit before the first caution for Wind Gap, PA’s Frank Cozze.

On the restart, Sheppard blasted back to the top spot, with Decker, Peter Britten and Ryan Godown in a three-wide battle for the second spot. As the field bunched up, the caution flag flew for Larry Wight, when his No. 99L machine stopped in turn 3 with a broken front end.

Sheppard bolted out of sight on the restart, while a five-car battle for the second spot ensued. Decker shot inside Britten, while Godown made it three-wide heading down the front stretch — followed quickly by Grandview Speedway all-time leading race winner, Craig VonDohren and Stewart Friesen.

A lap 9 caution for Jeff Strunk’s No. 126 machine slowed the field for the third time.

VonDohren shot into second on the restart while Friesen battled with Britten for the third position side-by-side for nearly 10 laps swapping the spot – and race grooves – almost half a dozen times.

The action slowed again on the 19th circuit for a tangle between 16-year-old Modified racer Max McLaughlin and Tommy Sheetz.

The top-5 remained unchanged on the restart, with Oley, PA’s Duane Howard making his intentions known moving into the sixth position from a tenth place starting spot.

The final caution flag flew on lap 22 for Vernon, NJ’s Brett Hearn – who stopped in turn four with a left front flat tire.

Sheppard stayed dominant at the drop of the green, as multiple two-car battles followed behind, shuffling the field.

Sheppard held tight and picked up his second consecutive Traffic Jam victory, and the $7,000 winner’s share.

The event slowed twice once on the initial restart and once just prior to the halfway point, but Kline remained dominant. It certainly wasn’t easy for the racer as Brandon Grosso – aboard the NitroFish No.32 machine – swapped groove multiple times trying to gain the top spot. Grosso would settle for second, Brian Hirthler finished in the third spot, Brad Arnold in fourth and Brian Papiez rounding out the top five finishers.

The next NAPA Auto Parts Thunder on the Hill Racing Series event will be Tuesday, July 26 for the 2nd Annual Thunder Cup featuring the 410 Sprint Cars and the 358 Modifieds. Also, that evening the remaining 20-laps of the rain-postponed 410 Sprint Car event and a second 358 Modified feature. Adult Admission is $25, Children 6-11: $10, Under 6: FREE! Racing will kick off 30 minutes earlier than originally scheduled at 7:00 PM.