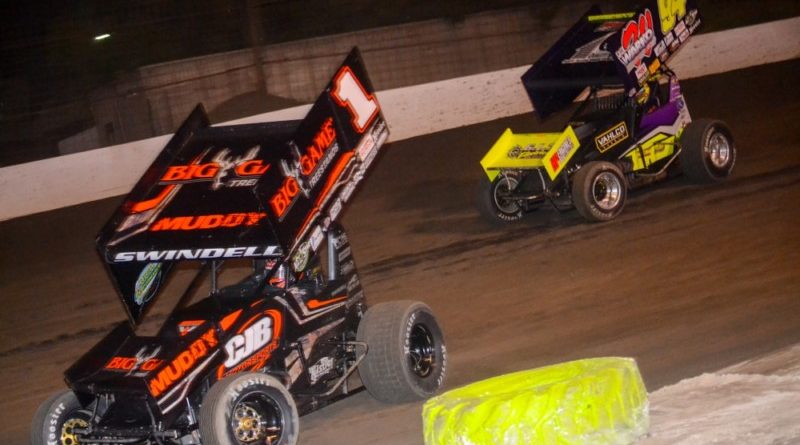 Bechtelsville, PA (January 8, 2017) — Five events highlight a series of specials that would make even the most loyal race fans salivate for the 28th year of action for the NAPA Auto Parts Thunder on the Hill Racing Series events at the Grandview Speedway. One hundred and twenty-four events have been presented in this co-promotion between Bruce Rogers, owner of Grandview Speedway, and Bob Miller, special events promoter — with nearly 4.3 million dollars distributed to competitors. The Thunder Series started as a 410 stand-alone event in August of 1990 and expanded to presenting multiple divisions from WoO Late Models and Sprints to USAC and SCRA non-wing sprints to include DIRTcar Modifieds and All Star Sprints plus a long list of support divisions.

For the fourth consecutive year, the Sunday night of Memorial Day weekend (May 28) will kick off the NAPA Auto Parts Thunder on the Hill Racing Series with a 358-Small-Block/Big-Block Modified spectacular that includes the Sportsman and the Mid-Atlantic Sprint Series. The modifieds will compete for $5,000 to win the 40 lap feature with an attractive $500 to take the green flag. With the Grandview Speedway racing on both Saturday and Sunday night, this Holiday weekend is filled with exciting action on the Grandview 1/3-mile dirt track.

The first mid-week event takes place on Tuesday, June 13 for the annual invasion of the USAC National Sprint Car Series, EASTERN STORM. These wingless warriors will take part in the Jesse Hockett Classic and will be joined by Grandview’s headline division – the 358 Modifieds. This marks the eleventh annual swing of the USAC Eastern Storm and as tradition stands, Grandview Speedway will host the opening night.

Nothing says ‘This is America’ quite like 410 Sprint Cars and we celebrate our Independence Day on Tuesday, July 4 with the Pennsylvania 410 Sprint Car Speed Week – a gathering of the region’s top Sprint Car competitors in a lucrative event that includes the very best of the 358 Modifieds.

Thursday, August 17 the NAPA Auto Parts Thunder on the Hill Racing Series presents a Sprint Car showdown like no other when the nationally touring Tony Stewart’s Arctic Cat All-Star Circuit of Champions Sprint Car Series returns to the Grandview Speedway competing for the 3rd Annual Thunder Cup. Joining the All-Stars is the ultra-competitive Sportsman division. In the 2016 event, Steve Kinser and Sammy Swindell were surprise 410 sprint entries and a surprise or two are planned for 2017. Prior Thunder Cup winners were Danny Dietrich 2015 and Stevie Smith in 2016.

The Thunder series rounds out 2017 on Saturday, October 14 with the MODS at the MADHOUSE Triple Thunder Thriller Halloween Party featuring a 40 Lap Big-Block/Small-Block Modified challenge that includes the Sportsman and the Mid-Atlantic Sprint Series. This event will continue the tradition of the popular Halloween Party getting underway at 6 PM

The 2017 racing season will include the Thunder on the Hill Racing Series mainstay activities and promotions, providing fun for the fans with elements such as: Pre-Race Pit Tours, the Inside/Out Experience – where fans can sign-up to watch hot laps from the infield, the Low Down & Dirty Radio Show pre-race Meet & Greet, JOE “THE PIZZA DUDE”, giveaways, fireworks, and appearances by the Thunder Girls.

NAPA Auto Parts continues their long run with Thunder on the Hill as the Series title sponsor, joined by Pioneer Pole Buildings, Quaker Steak and Lube, and GALCO Business Communications.

Facebook: http://www.facebook.com/thunderonthehill
About Thunder on the Hill Racing Series The brainchild of Grandview Speedway owner Bruce Rogers, special events promoter Bob Miller and local driving star Dave Kelly, the Thunder on the Hill Racing Series celebrates 27 years of the most anticipated events on the racing calendar year after year. In 124 events over $4.3 million dollars has been divvied up among the area’s fastest racers. What started as a single 410 Sprint Car event in 1990 has blossomed to feature a variety of racing action including: 358 Modifieds, USAC Wingless Sprints, All-Star Circuit of Champions, 360 & 410 Sprint Cars, Sportsman, Late Models, Midgets, Legends cars, DIRTcar and ROC Modified events.
About Grandview Speedway Grandview Speedway is a high-banked one-third mile clay oval, celebrating their 55th Anniversary season in 2017. The facility offers free parking, quality food at reasonable prices (be sure to try the french fries), a program book, Grandview Speedway and Thunder on the Hill race wear and great viewing from every seat in the house. Race fans may take part in the Inside/Out promotion, where you can sign up (no charge) to watch warm-ups from inside turn four. Race fans are also invited to victory lane following the racing program and, race fans may enter the pits after the races to meet the drivers. Be ready to enjoy the spine-tingling fireworks salute on the feature event parade lap.