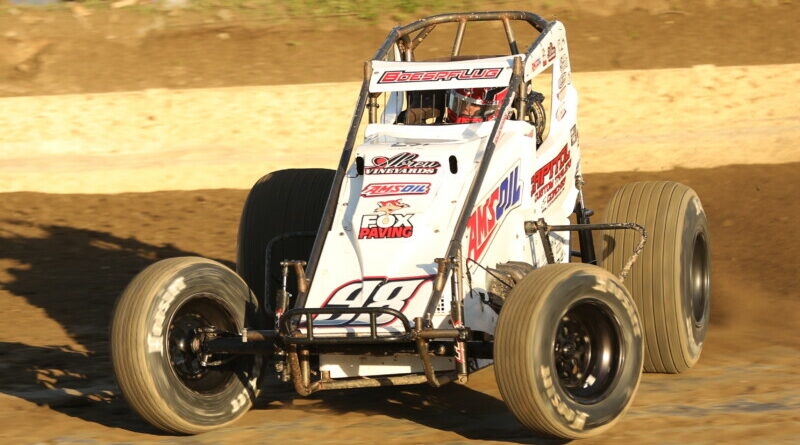 BECHTELSVILLE, PA . . . . .Rain and bad weather has not been a friend to local short track racing of late, but all race fans welcome and look forward to this storm, the thirteenth annual EASTERN STORM for the USAC AMSOIL Non-Wing Sprint Cars, and it’s coming to the Grandview Speedway on Tuesday night, June 11 with the $10,000 to win Jesse Hockett Classic. The NASCAR 358 Modifieds will be part of this big doubleheader with qualifying events leading up to the 30 lap, $3,000 to win feature event.

This wildly popular traveling series comes east just one time a year and this show is one you just can’t miss. Watch the non-wing sprints slide and glide around the one-third mile high banked Grandview Speedway and you’ll see some wheel banging, rooster tails and wheelies. And that’s just warm-ups.

For the thirteenth consecutive year, the USAC AMSOIL Non Wing Sprint Car National Championship returns East with stops at the Grandview Speedway, Bridgeport Speedway, BAPS Motor Speedway, Port Royal and Weedsport Speedway’s. The five race swing, in keeping with tradition will open with the NAPA Auto Parts Thunder on the Hill signature event at the Grandview Speedway. The Tuesday night, June 11 show will boast the USAC $10,000 to win Jesse Hockett Classic joined by the 358 NASCAR Modifieds with racing getting underway at 7:30 PM. This year also marks the 30th Anniversary of the Thunder on the Hill Racing Series.

Wednesday night, June 12 the Bridgeport Speedway will present the USAC AMSOIL Non-Wing sprints in a double header with the 600 micros, Thursday night, June 13 the tour moves to the BAP’S Speedway joined by the 360 Sprints and Super Sportsman. Saturday night, June 15 the traveling non-wing racers invade the Port Royal Speedway before closing out the swing at the popular Weedsport Speedway in Weedsport, NY on Sunday night, June 16. Defending USAC Eastern Storm Champion Chris Windom is already planning his trip East.

Grandview Track Owner Bruce Rogers and Thunder on the Hills’ Bob Miller made several attempts to bring 410 non-wing sprint cars back to Berks County, presenting CRA and SCRA events in the 1990’s . After many discussions, a deal was worked out and in June 2007, USAC made the trip to Grandview and it was Levi Jones who took the win in a historic USAC return to Berks County. Now in 2019, the Eastern Storm will mark its’ thirteenth tour to the East, opening on the famed “hill” of Grandview Speedway.

Drivers from all over the country will gather on the “hill” Tuesday night, June 11 for the 40 lap Jesse Hockett Classic and the roster will include Chris Windom, Justin Grant, C.J. Leary, Brady Bacon, Chase Stockon, Justin Grant, Tyler Courtney and Robert Ballou.

Advance tickets may be ordered for the Tuesday, June 11 USAC Sprints & Modified show by calling 443 513 4456. Please speak slowly and clearly when leaving a message and be sure to leave your name and number of tickets you will need. Feel free to leave your phone number as well. Tickets may be paid for and picked up at the WILL CALL Window on race night after 3:30 PM. These tickets will entitle you to enter the grandstands at 4:30. Adult admission tickets are $30, children 6 to 11 $10 and children five and under will be admitted for free.

About Thunder on the Hill Racing Series

The brainchild of Grandview Speedway owner Bruce Rogers, special events promoter Bob Miller, and local driving star Dave Kelly, the Thunder on the Hill Racing Series celebrates 30 years of the most anticipated events of the racing calendar year after year. In 132 events, over $4.6 million dollars has been divvied up among the area’s fastest racers. What started as a single 410 Sprint Car event in 1990 has blossomed to feature a variety of racing action including 358 Modifieds, USAC Wingless Sprints, All-Star Circuit of Champions, 360 & 410 Sprint Cars, Sportsman, Late Models, Midgets, Legend Cars, DIRTcar and ROC Modified events. The 2019 30th Anniversary Series of Thunder on the Hill is dedicated to Bruce Rogers.

Grandview Speedway is a high-banked one-third mile clay oval, celebrating their 57th Anniversary season in 2019. The facility offers free parking, quality food at reasonable prices (be sure to try the french fries), a program book, Grandview Speedway and Thunder on the Hill racewear and great viewing from every seat in the house. Race fans may take part in the Inside/Out promotion, where you can sign up (no charge) to watch warm-ups from inside turn four. Race fans are also invited to victory lane following the racing program and, race fans may enter the pits after the races to meet the drivers. Be ready to enjoy the spine-tingling fireworks salute on the feature event parade lap.