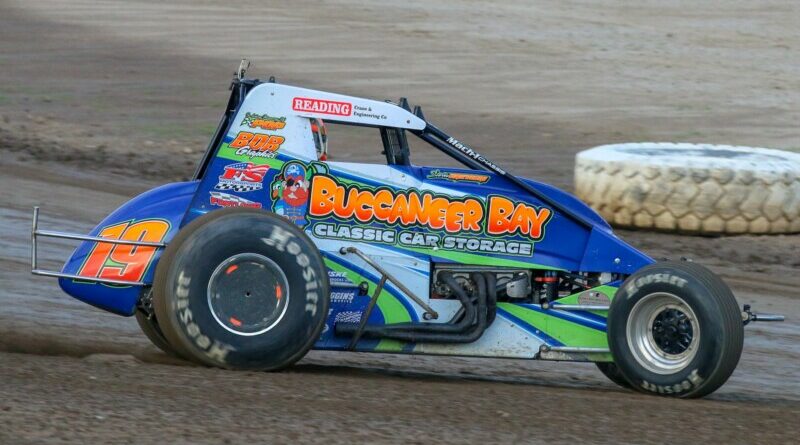 For Drevicki, teaming up with Franckowiak and Clauson Marshall Newman Racing is a big opportunity that could open doors in the future.   Franckowiak has ties with USAC going way back to watching them race at the Reading Fairgrounds when he was a child.   “I am a devout USAC supporter as a driver, car owner, sponsor and advocate watching some of the greatest Indy car drivers of our generation come through the USAC midgets, sprints and champ cars and it is an amazing honor to be part of the USAC family”, stated Gene.

So why USAC?   Gene replied, “I support USAC because they run a professional organization with tremendous history in the sport.   The races are well run, the staff and officials treat the racers with respect, the point fund and purses are good and their awards banquet is amazing. . . and most of all, the racing is great” !

At one time, Gene considered himself a low budget racer and there were a few folks who always helped him and today, Gene is in a different position.   “I like to think I am paying it forward by helping others who are in the position I was once in”, said Gene.

What was your career highlight?   “Winning my first USAC race was the single happiest moment in my sprint car career.  And now,  years later, being a partner with the Clauson Marshall USAC sprint car team and winning the 2018 Tony Hulman Classic as well as the 2018 National Championship was a kid’s dream come true”, stated Gene in a very sincere tone.  The partnership did not end there, for the past two years, Gene has been deeply involved with Brady Bacon Racing which fields the Hoffman #69 “Mean Green” sprint car on the USAC Tour.  Gene also enjoyed success winning the 2013 URC Championship  (another historical organization)  with Dave Ely as the driver.   Franckowiak and Ely accomplishments include  a win on the  ASCS National tour, Central PA 410 wins,  Patriot and ESS sprint  victories throughout a thirteen year relationship which continues today.

Gene Franckowiak also played a big part in the start of the USAC Eastern Storm.    It was Gene who brought together Bob Miller and USAC’s Greg Stabb that opened discussions and eventually the start of the USAC Eastern Storm back in 2007.   The first Eastern Storm event, marked the return of USAC to Berks County since they last competed at the Reading Fairgrounds when Paul Pitzer took the victory in 1979.     It was  Levi Jones  who won the first Eastern Storm at the Grandview Speedway on Tuesday night,  June 6, 2007 and he came back to win again in  2010.   Since that time, other USAC feature winners at Grandview/Thunder on the Hill includes Bryan Clauson (3),  Brady Bacon (2),

So it all kicks off again on Tuesday night, June 11 at the Grandview Speedway and the opening event of the 2019 NAPA Auto Parts Thunder on the Hill Racing Series.    Gates open at 5 PM with race time set for 7:30 PM.   The USAC Sprints will open with time trials followed by a series of qualifying events leading up to the 40 lap $10,000 to win Jesse Hockett Classic.   The Modifieds will compete in a qualifying events with a $3,000 to win 30 lap feature closing out the night of racing.

Advance tickets may be ordered for the Tuesday, June 11 USAC Sprints & Modified show by calling 443 513 4456.   Please speak slowly and clearly when leaving a message and be sure to leave your name and number of tickets you will need.  Feel free to leave your phone number as well.   Tickets may be paid for and picked up at the WILL CALL Window on race night after 3:30 PM.   These tickets will entitle you to enter the grandstands at 4:30.    Adult admission tickets are $30, children 6 to 11 $10 and children five and under will be admitted for free.

About Thunder on the Hill Racing Series

The brainchild of Grandview Speedway owner Bruce Rogers, special events promoter Bob Miller, and local driving star Dave Kelly, the Thunder on the Hill Racing Series celebrates 30 years of the most anticipated events of the racing calendar year after year.    In 132 events, over $4.6 million dollars has been divvied up among the area’s fastest racers.  What started as a single 410 Sprint Car event in 1990 has blossomed to feature a variety of racing action including 358 Modifieds, USAC Wingless Sprints, All-Star Circuit of Champions, 360 & 410 Sprint Cars, Sportsman, Late Models, Midgets, Legend Cars, DIRTcar and ROC Modified events.    The 2019 30th Anniversary Series of Thunder on the Hill is dedicated to Bruce Rogers.

Grandview Speedway is a high-banked one-third mile clay oval, celebrating their 57th Anniversary season in 2019.   The facility offers free parking, quality food at reasonable prices (be sure to try the french fries), a program book, Grandview Speedway and Thunder on the Hill racewear and great viewing from every seat in the house.  Race fans may take part in the Inside/Out promotion, where you can sign up (no charge) to watch warm-ups from inside turn four.  Race fans are also invited to victory lane following the racing program and, race fans may enter the pits after the races to meet the drivers.   Be ready to enjoy the spine-tingling fireworks salute on the feature event parade lap.