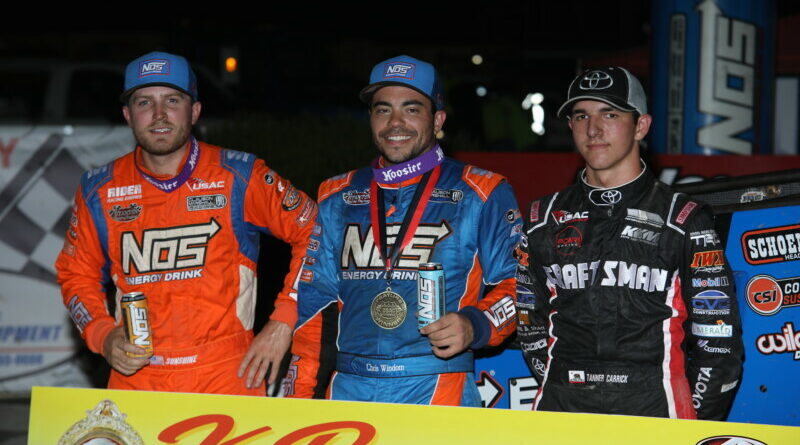 BECHTELSVILLE, PA (July 30, 2019) – It was a thrilling night of racing Tuesday night at Grandview Speedway for the return of the USAC Midgets – teamed up with the NASCAR 358 Modifieds — as part of the NAPA Auto Parts Thunder on the Hill Racing Series. The Ken Brenn USAC Midget Masters event was won by Chris Windom, while Jeff Strunk picked up his second consecutive Thunder Modified win and fourteenth career Thunder victory.

The 30 lap victory marked Windom’s second career midget win, battling it out with teammate Tyler Courtney in the late stages of the event.

“I hated to see all those late-race restarts,” Windom said in victory lane. “For us (he and Courtney) to finish first and second the first night into Pennsylvania Midget Week is pretty cool.”

Windom inherited the top starting position from Zeb Wise, who moved to a back-up car and was forced to the rear of the field.

At the drop of the green flag, Windom muscled to the front holding off Kevin Thomas Jr. for the initial five circuits around the one-third mile Bechtelsville raceway. With a battle building behind the top competitors, Courtney moved into the third position followed by Jason McDougal, and Kyle Larson. 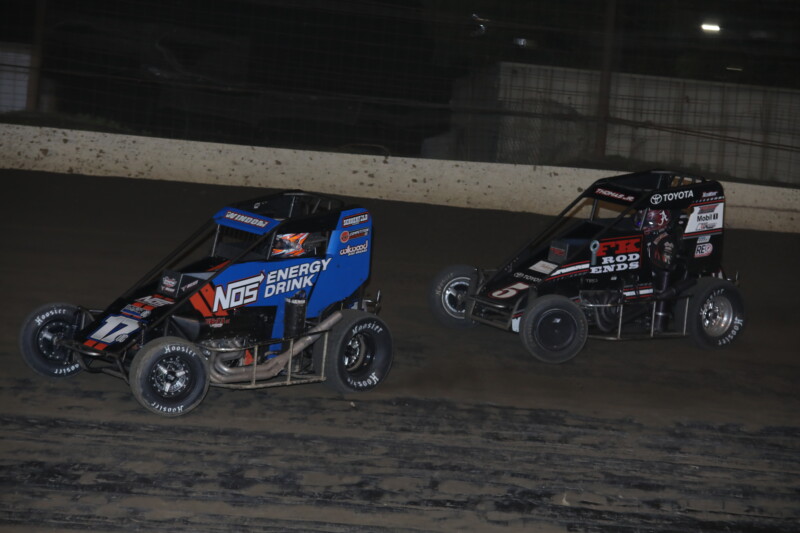 The top five charged around nose-to-tail swapping race grooves and weaving in and out of lapped traffic, while Windom maintained the top spot.

The red flag flew on lap 23 for Steve Buckwalter, who rolled over after contact with a spinning Zeb Wise.

Courtney moved to second with five laps remaining as Tanner Carrick and Kyle Larson both battled past Kevin Thomas, Jr. With four competitors dicing it out for the second position, Windom was able to pull away to a ten-car advantage.

A lap 28 caution slowed the field for the final time and set up a two-lap dash to the checkered flag.

Windom held the point as the green flag waved, with teammate Tyler Courtney right on his rear bumper.

As the two approached for the white flag, Courtney shot to the bottom of the race track charging inside Windom securing the lead heading into turn 1. But Windom battled back down the backstretch, regained the top spot and scored the Ken Brenn Midget Masters win.

“I knew the slider was coming,” Windom said of Courtney in Victory Lane. “I’m just glad I was able to sneak back by him, I did everything I could to hold him off.”

After a valiant effort, Tyler Courtney would settle for second, Tanner Carrick finished in third, Tanner Thorson came from a 15th starting position to finish fourth, and Chad Boat finished in the fifth position.

Kyle Larson set the Quick Time with a lap of 14.310 setting an initial track record for the USAC Midgets. USAC Midget qualifying events were won by Tanner Thorson, Tyler Courtney, and Jason McDougal. 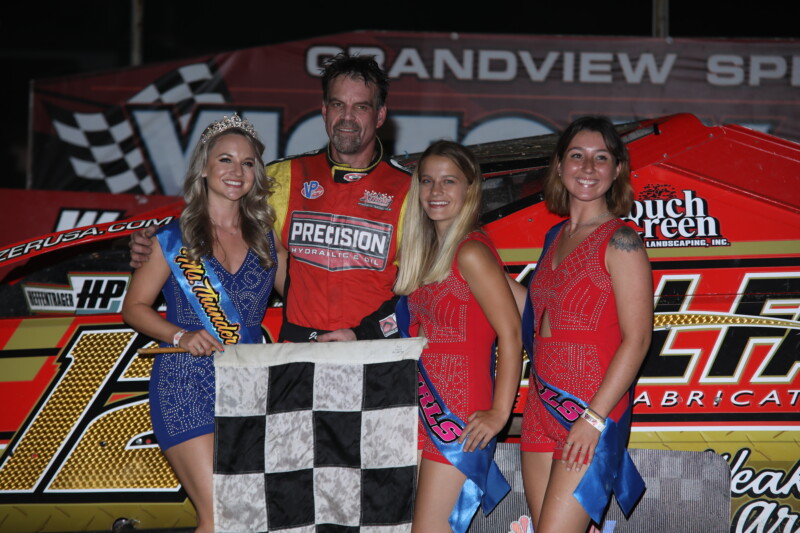 In the NASCAR 358 Modified event, Doug Manmiller and Tim Buckwalter led the field to the drop of the green flag with Manmiller holding the lead for the initial two laps. Buckwalter would take over the top spot on lap three with Meme Desantis and Manmiller right on his tail.

All eyes were on Jeff Strunk as he moved into second on the eighth lap of the event – from his fifth-place starting spot. And powered past Buckwalter for the lead, two laps later.

In a race without any caution flags, Strunk was able to steer the Glenn Hyneman-owned number 126 machine around heavy lapped traffic maintaining the lead and claiming his 200th career victory.

Craig VonDohren closed in the late stages – but would settle for second place, Tim Buckwalter finished in third, Kevin Hirthler finished in fourth and Brett Kressley finished in fifth after starting in the 14th position.

Ken Brenn Sr. was on hand for the event in his honor posing for photographs alongside Kyle Larson – who piloted a Keith Kunz-owned midget painted up like Brenn’s famed number 24 machine.

The NAPA Auto Parts Thunder on the Hill Racing Series returns on Thursday, August 22 with the Ollie’s Bargain Outlet All Star Circuit of Champions 410 Sprint Cars, alongside the NASCAR 38 Modifieds.