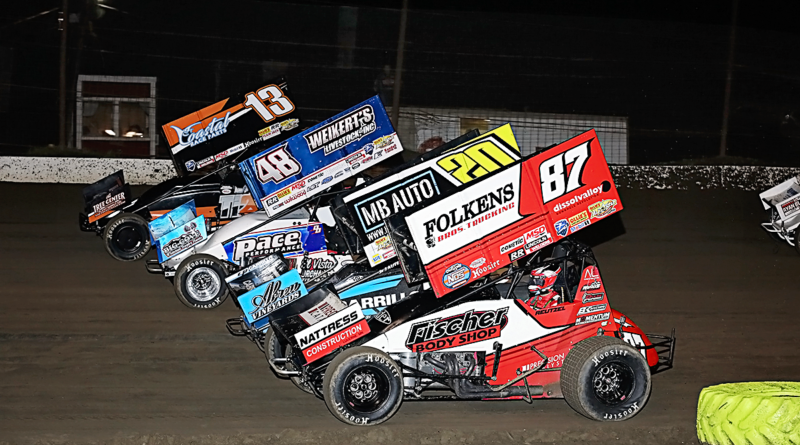 BECHTELSVILLES, PA (August 22, 2019) – It was a wet and wild night of racing at Grandview Speedway on Thursday night, as Levan Machine and Truck Equipment presented the Inaugural Hodnett Cup as part of the NAPA Auto Parts Thunder on the Hill Racing Series. Aaron Reutzel was the winner of the Ollie’s Bargain Outlet All Star Circuit of Champions feature earning $5,000 as Mike Gular won the NASCAR 358 Modified main event.

An unexpected rainstorm popped up just after All Star Sprint Car time trials, delaying the action for nearly 2 hours. Track crews worked vigorously, and with the help of drivers and teams, heat race events rolled out just before 10 PM. With a good crowd on hand everyone was determined to make every effort to get the show in and they did.

“We just want to race,” Reutzel said graciously thanking everyone during victory lane ceremonies. “I can’t thank the fans and the track team enough. We were lucky – and some days I’d rather be lucky than good.”

Luck was definitely on Reutzel’s side, starting the 35-lap event from the front row alongside Nashville, TN’s Paul McMahan. McMahan attempted to slide in front of Reutzel on the initial green flag start – but couldn’t complete the pass.

Reutzel powered away to full straight-a-way lead, while Danny Dietrich, Ryan Smith, and Ryan Taylor battled for the third position.

With drivers settling in on an ultra-fast race track, lapped cars proved to a real challenge for Reutzel, a Clute, TX-native – closing the gap between him and McMahan, as laps clicked away.

“The lapped cars weren’t really cooperating with me today,” Reutzel offered in victory lane. “The track was fast and that was challenging.”

While McMahan, aboard the No. 13 machine, was able to lessen the leader’s advantage, he would pressure Reutzel, but couldn’t get close enough to really challenge.

The yellow flag flew for the final time on lap 26 – a huge benefit to Reutzel – who charged on to claim his second consecutive NAPA Auto Parts Thunder on the Hill All Star Sprint Car victory. Reutzel earned $5,000 for his efforts and added his name to the Hodnett Cup.

Mike Gular of Harleysville, PA picked up the $3,000 win in the NASCAR 358 portion of the evening’s event.

Dylan Swinehart and Alex Yankowski made up the front row of the 30 lap feature event – but it was Gular who took the lead heading down the backstretch of the one-third-mile dirt track, with Duane Howard moving into the second position just one circuit later.

Gular and Howard dueled for the top spot for the first half of the event before a lap 16 yellow flag slowed the action and reset the field.

A three-car battle for the win between Gular, Howard, and Jeff Strunk brought the event down to the wire.

Door-to-Door drag racing to the checkered flag, Gular picked up the win with Howard in second, Jeff Strunk in third, Craig VonDohren in fourth and Jared Umbenhauer in the fifth position.

Modified Heat races were won by Doug Manmiller, Jeff Strunk, and Dylan Swinehart. 29 NASCAR 358 Modifieds were signed in to compete.

The NAPA Auto Parts Thunder on the Hill Racing Series returns on Saturday, October 19 with the Modifieds in a Big Block and Small Block Showdown, Sportsman, and MASS 305 Sprint Cars.

SPECIAL NOTE: The staff and management of the Grandview Speedway and Thunder on the Hill Racing Series would like to thank all the race fans, drivers and car owners who each played a special part in getting this event completed. It was a most challenging night but we did present the full show. A thank you also goes out to the hard working track crew that turned around a near impossible challenge. Thank you to all!