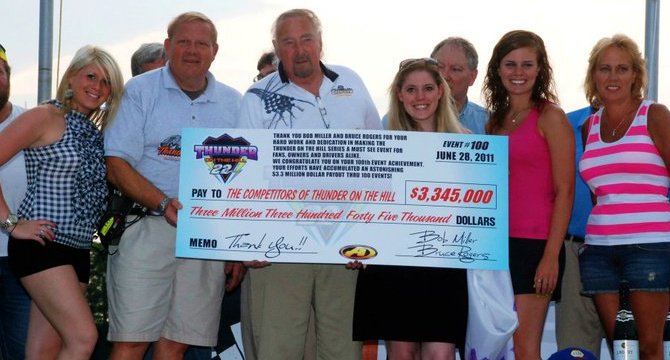 A Thank You from NAPA Auto Parts Thunder on the Hill Series Promoter, Bob Miller

In 2011, Thunder on the Hill celebrated its’ 100th event at Grandview Speedway.

Saturday night, we closed out 30 years of Thunder on the Hill, with a cumulative payout out in excess of $4.8 in 137 events.  The Series developed into much more than just 410 sprint car events. We hosted many of the top touring divisions to include The WoO Sprints, WoO Late Models, CRA & SCRA Non-Wing Sprints, DIRTcar Modifieds, ROC Modifieds, USAC Non-Wing Sprints & USAC Non-Wing Midgets, ARDC, 358 Sprints, URC and MASS Sprints and the Legends.

Throughout those years, we’ve attracted literally the best drivers to strap into a race car. The list is just too long to mention.

Through it all, Jeff Strunk prevails as the winningest Thunder on the Hill Modified driver with 16 wins, Billy Pauch leads with 11 sprint car victories including a win the SCRA and a win with CRA.

It’s been just a fun journey.

I do want to thank the Roger’s Family for always making Donna and I feel welcomed at their race track. We feel like we are part of the family. I only wish Bruce where here to celebrate reaching this milestone.

In addition, a big thank you goes to the track officials who make these shows work as well as the safety crews who keep all of us safe race after race.

Special thanks to Jay Dugan for his efforts with social media and keeping everyone informed on what is going on with the Thunder Series. Also, a thank you to Kenny Rogers, Brad Missimer and Kenny McMullen for their track preparation. I will serve up this team against any track in the country on track conditions and consistency.

We truly appreciate the Drivers, Owners and Race Teams, their support is greatly appreciated.

And a big thank you to the media members that offer such generous coverage of our events.

Last, but certainly not least, I want to thank the race fans. Like the Drivers and Owners, you have braved all the challenging weather conditions that we were faced within thirty years. From the rain to fierce thunderstorms to the steaming hot nights to the frigid cold nights (and did I mention the rain?) the fans have all been there in strong support.

Once again, thanks to everyone for their support of Thunder on the Hill for the past thirty years.

We look forward to planning season thirty-one in 2020.

Be safe and enjoy the coming Holidays,
Bob and Donna Miller
Thunder on the Hill Racing Series