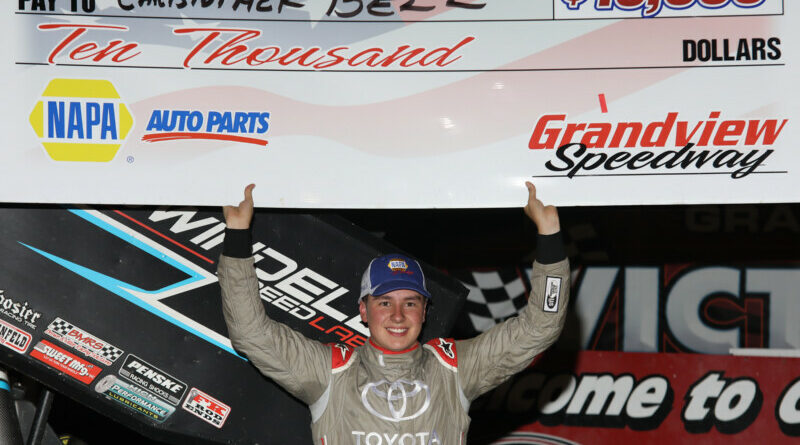 This special night is dedicated to Ken Brenn, an individual with a reputation rich in midget history and someone who once promoted midget racing at Grandview. Ken Brenn is an absolute “class act” and has been part of the local racing fabric for many years, enjoying much success as a modified car owner and a former promoter of the Bridgeport Speedway. Some other surprises are being arranged as we honor Ken — who plans to be at this event and drop the first green flag of the night!

It took 102 starts for Chris Windom to reach USAC NOS Energy Drink National Midget victory lane for the first time in his career in June of 2019. It took just six more for the Canton, Illinois native to get there for the second time in the 2019 Eastern Midget Week opener at Grandview Speedway.

In last year’s Grandview tilt, Windom fought Tyler Courtney for the win on the final lap, losing the lead via a Courtney slider, in turn, one, then outdueled him into turn three to retake the position before sealing the deal to win in the series’ first visit to the 1/3-mile dirt oval in three decades.

No Pennsylvania driver has won a USAC National Midget feature since Royersford’s Steve Buckwalter in 2010. Buckwalter, the 2010 ARDC Midget champ, won that year during the Indiana Midget Week round at Gas City and will join the Grandview field on Tuesday after finishing 18th there a year ago.  Fellow Pennsylvanian Andrew Layser (Collegeville, Pa.) finished 13th at Grandview in 2019 during his USAC National Midget Rookie of the Year campaign and is 9th in the standings this year as a Tucker-Boat Motorsports teammate to 2019 Grandview winner Windom.

Reading, Pennsylvania’s Steven Drevicki is a perennial winner on the USAC Rapid Tire East Coast Sprint Car circuit, winning the last two year’s titles, and has already tallied two victories this season and is the leader once again in the standings. He is equally successful in the Midgets as well, capturing ARDC championships in both 2014 and 2015. The recent non-sanctioned midget winner at Abbottstown, Pa.’s Lincoln Speedway, finished 17th with the USAC Midgets at Grandview in 2019.

USAC National Midget racing has occurred only three times at Grandview. The debut in 1988 was won by Rich Vogler while the follow up in 1989 was captured by Russ Gamester. Both drivers also won the USAC National Midget championship in those same years. Chris Windom won the series’ return to Grandview in 2019.

The 358 Modifieds will play an equally important part of this event with qualifying and a 30 lap feature that will $3,000 to the winner. Ryan Watt is hot off a Thunder on the Hill victory Tuesday night when he thrilled fans taking the win over a four-car race for the top spot. Jeff Strunk, Duane Howard, Craig VonDohren, Rick Lukach, Doug Manmiller, Brett Kressley, Kevin Hirthler, to name a few.

Adult admission tickets are $28, Children 6 to 11 are $10, Children 5 and under will be admitted free. The pit fee is $40, and a license is not required. Advance tickets are available by calling 443 513 4456. Please speak clearly and provide your first and last name and the number of tickets you need. Tickets may be paid for and picked up at the WILL CALL window on race night. We ask that you please bring exact change. Advance ticket holders may enter the grandstands at 4:30 PM. Advance tickets orders can be processed up to the day before the race. We apologize, but advance tickets will NOT be available on race day.

The conditions and requirements under the COVID-19 situation are ever-changing, and we will provide updates as we approach race night. To offer the safest possible conditions for our fans, competitors, officials, safety crew, and track employees, we are making the following requests.

We also advise that you wear a face mask, although not mandatory.

When possible, especially when standing in line, practice social distancing, and be considerate of the individuals around you.

Also, as much as we want you to join us if you are not feeling well, please do not attend.

MODS AT THE MADHOUSE Trick or Treat Triple 20’s & Sportsman