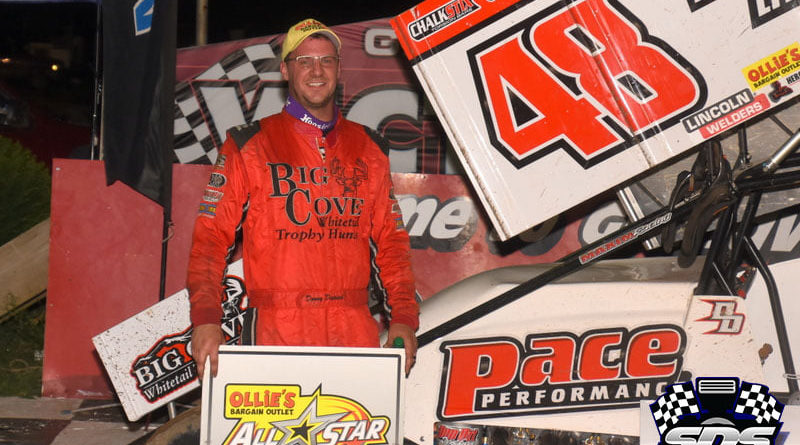 BECHTELSVILLE, PA – August 27, 2020 – A wild finish and wet weather highlighted a thrilling night of racing at Grandview Speedway, on Thursday, for the NAPA Auto Parts Thunder on the Hill Racing Series Thunder Cup presented by Levan Machine & Truck Equipment. Grandview Speedway and Thunder on the Hill pulled off another upset, beating Mother Nature, her rain, thunder and lightning to complete the double header event by 11 PM. And the show was a thriller on an exceptionally well prepared and fast track. A field of twenty-five sprint cars and thirty-three modifieds were in the pits for the 139th Thunder on the Hill Racing Series event at Grandview.

Dietrich, of Gettyburg, PA, found himself in second place when the white flag waved, with Aaron Reutzel in the lead and on his way to a third-consecutive All Star win at Grandview Speedway. The leaders swapped the top spot on lap 20 of the feature with Reutzel regaining the lead from Dietrich. But on the final lap, with slower traffic ahead, the leaders made contract entering turn one. Dietrich took the lead and the contact sent Reutzel spinning in turn one displaying the yellow flag.

“There’s not really a lot to say,” Dietrich explained about the altercation during Victory Lane ceremonies. “Our car was good, and I wanted to win.”

A pair of previous winners led the field to the green flag with Reutzel starting on the pole of the 35-lap Thunder Cup A -Main and Freddie Rahmer starting in the second position.

At the drop of the green flag, Reutzel quickly darted to the lead and held command of the field for the first ten circuits while Dietrich, Rahmer, and Christopher Bell dueled for second spot behind him. Dietrich charged inside Rahmer for second, with Bell muscling his way around Rahmer into third just two laps later.

Dietrich and Bell didn’t let Reutzel out of their sights. As the No. 48 and the No. 39 rand down Reutzel’s No. 87, and waited to strike. With Bell on his tail, Dietrich charged outside Reutzel taking the top position on lap 20.

Traffic continued to be an obstacle for the leaders, with Reutzel maneuvering back into the lead just four circuits later.

The white flag flew, indicating the final trip around the one-third-mile raceway. Heavy-footed, Dietrich motored into turn 1, making contact with Reutzel who spun. The caution left Reutzel to restart in the 20th position.

Dietrich would roll on through a green, white, checkered finish to claim the Thunder Cup win and the $5,000 prize money. Christopher Bell finished in second position, Freddie Rahmer in the third position, James McFadden in fourth, and Paul McMahan in fifth. 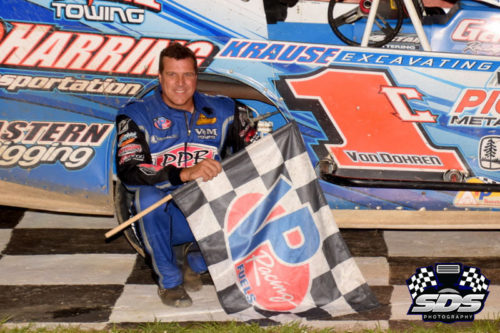 Justin Grim started second and led the early stages of the event before Manmiller took control on the third circuit, with VonDohren following into the second position.

VonDohren claimed the top spot on the 6th lap dueling with Manmiller side-by-side.

In the end, VonDohren would sail on to victory, his seventh career Thunder on the Hill win. Manmiller would settle for second position, Brett Kressley finished in third, Billy Pauch, Jr. in fourth, and Mike Gular finishing in the fifth spot.

A brief rain shower slowed the action during NASCAR 358 Modified qualifying. The track crew worked vigorously to maintain control of the one-third-mile clay oval, and the storm only saw a 30-minute delay. An exercise too often displayed at the Thunder on the Hill events.

Special thanks to the fans and race teams who once again supported all the efforts and displayed outstanding cooperation to get this show completed. We also thank Levan Machine and Truck Equipment of Fleetwood, PA for their support and efforts. It was truly a big win in getting this show completed.