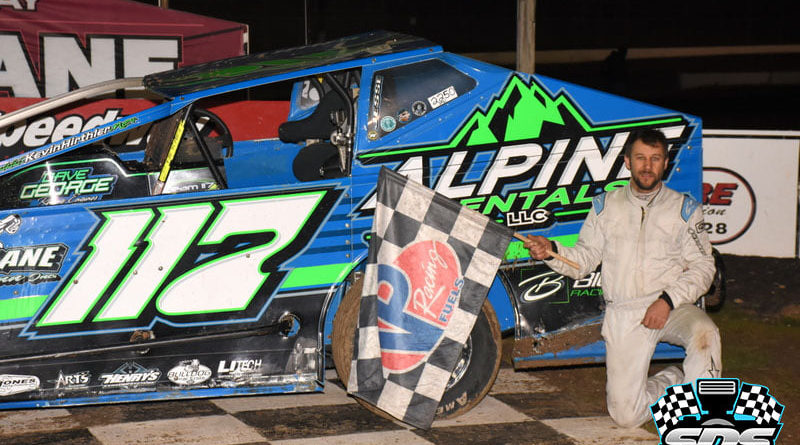 Bechtelsville, PA (October 17, 2020) – Three different winners topped the NAPA Auto Parts Thunder on the Hill Racing Series Trick or Treat Triple 20s for Modifieds at Grandview Speedway on Saturday Night – with Kevin Hirthler, Ryan Beltz, and Duane Howard picking up the Modified wins. Kevin Hirthler would add a Sportsman victory to his tally for the night, winning that 20-lap event, as well. A field of fifty Modifieds took part in the event along with thirty-three Sportsman. This was the third event of the Thunder on the Hill Racing Series of 2020 at Grandview in a season abbreviated by the current virus. On a cold night for racing, the show started promptly at 6 PM and the final checker flag fell before 9:30 PM. This also allowed many race fans to visit their favorite drivers in the pits.

Kevin Hirthler, a Boyertown, Pa. native, led from flag-to-flag in the first Modified 20-lap event, dodging lapped cars and holding off a late-race charge from Louden Reimert. With only a single caution falling on the third trip around the Grandview Speedway high-banks, Hirthler hit lapped traffic just past the mid-way mark, but that didn’t hinder Hirthler. He dominated the event and easily picked up the checkered flag. Reimert finished in second, John Willman third, Duane Howard finished in fourth, and Dylan Swinehart finished in fifth.

With a victory under his belt, Hirthler selected an invert of twelve before a 10-minute break in the action. The invert put Ryan Beltz and Eric Biehn on the front row for the second Modified 20 of the night.

Beltz wasn’t going to give anyone else a chance of victory in the 20-lap feature. He shot out like a cannon on the initial restart and extended the lead between him and Nate Brinker lap after lap.

All eyes were on Kevin Hirthler – gunning for the multi-feature-win bonus up for grabs courtesy of Pioneer Pole Buildings. Hirthler moved to seventh by the fourth circuit but couldn’t get close to the leaders, settling for a sixth-place finish.

Beltz selected an invert of eight cars in a blind draw before the third and final feature event. 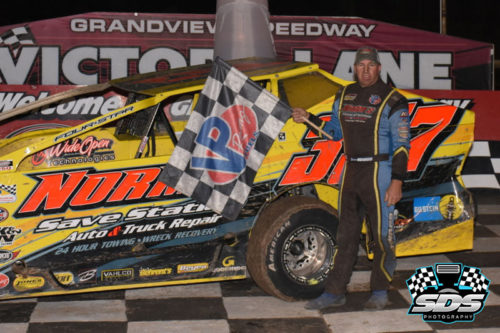 This put Eric Biehn on the front row again with Duane Howard by his side. Hirthler would start third within his final chance at the PPB Bonus money.

Duane Howard of Oley, PA, darted ahead of Biehn at the start of the nightcap event, with Hirthler following on his tail into the second position. Hirthler kept pace with the Norm’s Save Station No. 357 machine but couldn’t complete the pass on the 86-time Grandview Speedway winner.

The only caution of the event flew on lap 17, closing the gap between Howard and Hirthler and giving the No. 117 machine a final opportunity to take a run for the win. On the restart, Howard pulled away from the rest of the field, ending the 2020 racing season at Grandview with a victory. Hirthler would finish in second, Frank Cozze finished in third, Keith Hoffman finished in fourth, and Nate Brinker rounded out the top five finishers.

Fifty Modifieds qualified for the night’s three 20-lap feature events. With no driver scoring multiple wins, the Pioneer Pole Buildings $2500 bonus remained unclaimed. Special thanks to PPB for their continued support of Thunder on the Hill. 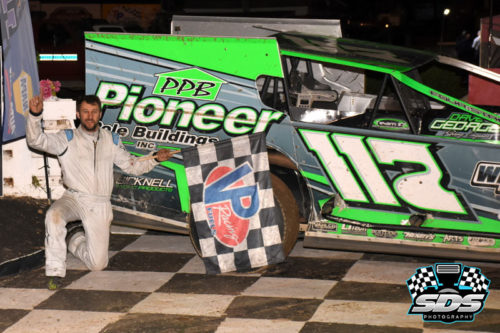 Before topping the first Modified twenty-lap event, Kevin Hirthler scored the win in the Sportsman event from a tenth-place starting spot. Hirthler was a man on a mission, gaining five spots on the initial start and taking the lead from Paul Kline on the seventh-lap. From there until the only caution on lap 18, Hirthler was in a world of his own, building a massive lead. However, when the caution flew with two laps to go, the entire landscape of the race was changed, with Hirthler finding himself alongside his brother, Brian.

Brian would get four opportunities to pick up the $1,300 Sportsman prize but couldn’t outgun his older brother. Kevin Hirthler claimed the top spot, Brian Hirthler would come home in second, Kenny Gilmore finished in third, Steve Young finished in fourth, and Jesse Leiby finished in fifth.

Sportsman heats were won by Brian Hirthler, Kevin Hirthler, and Dylan Hoch. The Sportsman consolation was won by Kyle Smith.

Plans for the 2021 Season of Thunder on the Hill Racing at Grandview Speedway is well underway, and dates are expected to be announced soon.

For more information about the NAPA Auto Parts Thunder on the Hill Racing Series, visit www.thunderonthehillracingseries.com or follow along @TOTHRacing on Social Media.

We send our sincere thanks to all the drivers, owners, crew members, spectators as well as the track officials and safety crews for their support of the 31st Thunder on the Hill Racing Series.