“Grandview has quickly become one of my favorite tracks, and I look forward to coming here every year,” Bacon said in USAC Victory lane. “I knew if I could get to second, I’d be in a good position to get the win.”

Kevin Thomas Jr. jumped to the front of the pack at the drop of the green flag with Brandon Mattox, Tim Buckwalter, and Bacon in hot pursuit. Thomas gained a full-straight-a-way lead in the initial circuits while the battle for second heated up.

Bacon charged into third position on the sixth lap, and powered outside of Mattox coming out of turn two, moving into the second position just two laps later. The yellow flew for sixth-place competitor, Chris Windom, who spun after contact slowing the action for the first time of the night.

Losing his sizable lead, Thomas maintained the top spot on the restart with Bacon on his tail. The two diced around the topside of the one-third mile highbanks, and battled side-by-side down the straightaways, working their way through heavy lapped traffic.

As the scoreboard ticked passed lap 20, Bacon slid high in turn four and dove to the inside of Thomas to complete the pass for the lead, quickly pulling a full 1 second advantage over Thomas.

The red flag flew on lap 29 for Steven Drevicki, who tagged the wall and flipped between turns 3 and 4.

Bacon continued his quest for four in-a-row on the restart, but Thomas wasn’t done, closing in during the later stages of the event, rapidly switching lanes but unable to make a move on Bacon, who scored the win and the $6,000 payday.

Bacon’s win tied him for the most consecutive Thunder on the Hill Racing Series wins, a record held by Greg Hodnett. 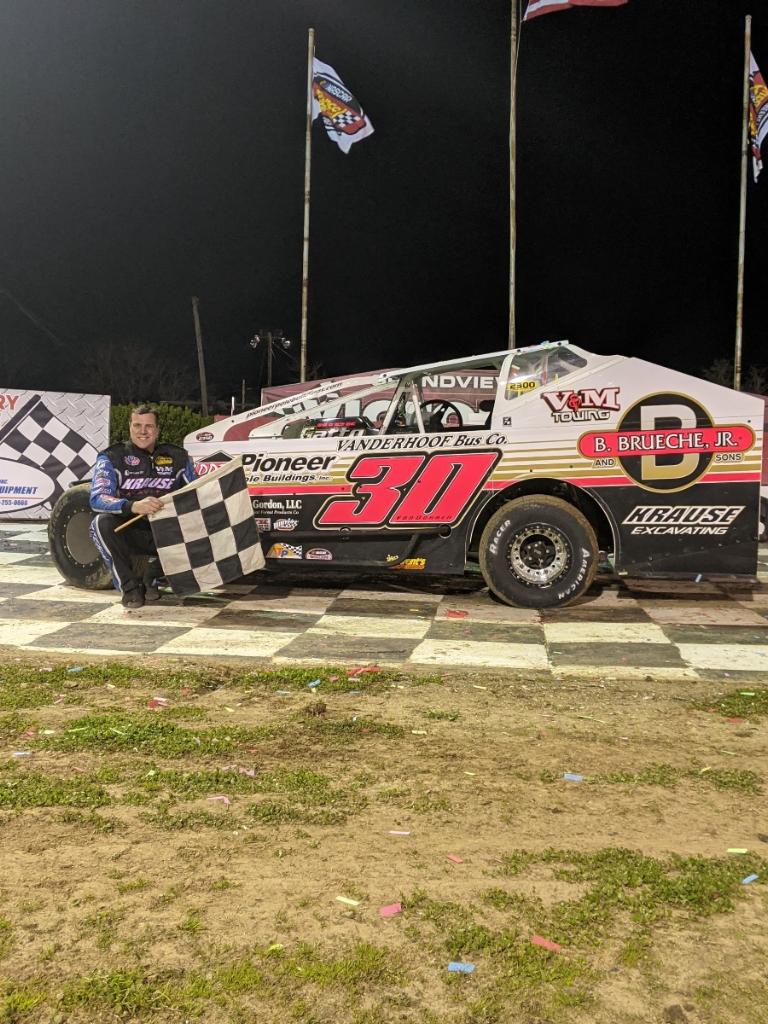 Boyertown, Pennsylvania’s Craig Von Dohren picked up the win in the 30-lap 358 Modified portion of the event scoring the $3,000 top prize.

“The thing about Grandview is that you never know how close someone is, so you always have to be prepared and stay up on the wheel,” Von Dohren said in NAPA Auto Parts Victory Lane.

The only challenge came when CVD battled through lapped traffic at the mid-way point of the event, but a caution with five laps to go offered up an open track and the ability to coast onto victory.

Duane Howard finished in the second position, Alex Yankowski in third, Jeff Strunk in fourth and Doug Manmiller in fifth.

Robert Altman, who always has the Thunder on the Hill fans in mind, said ‘Thank You’ by presenting lucky fans with $10 WAWA gift cards.

The NAPA Auto Parts Thunder on the Hill Racing Series returns to Grandview Speedway on Sunday, May 30 with the ‘Roaring Triple 20s’ event featuring three 20-lap feature events for the Big-Block and 358 Modifieds, along with the Sportsman, and Outlaw Racing Series Vintage cars.