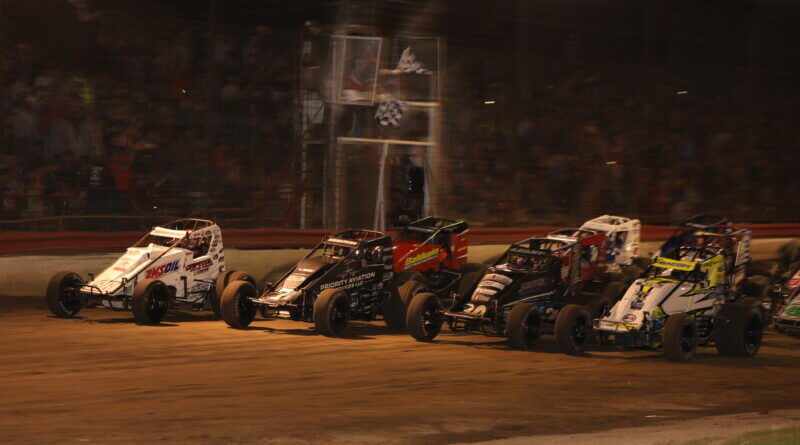 BECHTELSVILLE, PA APRIL 16, 2021 . . . . . . The USAC AMSOIL NON-WING Sprint National Tour is heading East as the Keystone Invasion will open at the Grandview Speedway when the NAPA Auto Parts Thunder on the Hill Racing Series kicks-off on Thursday night, April 22. If you have never seen the USAC Non-Wing Sprints at Grandview, this is a “must see” event Wheelies, slide-jobs, some wheel banging and sprint cars grazing the outside boiler plate is visible every lap. USAC warm-ups will thrill you! With the USAC Non-Wing Sprints and the 358 Modifieds on the race card, there will be plenty of “Rub Rails & Rooster Tails” on the Hill. Gates Open at 5 PM and race time is set for 7:30 PM.

One driver to watch is USAC’s “Macho Man”, Brady Bacon of Broken Arrow, Oklahoma who won in his last three starts at Grandview. In the history of Thunder on the Hill, only Greg Hodnett won four features, those wins coming in a 410 wing sprint car. So the question is, will Bacon pull off the win in the 40 lap “Run Rails & Rooster Tails 40 paying $6,000 to the winner ? Winning will not be an easy task as other USAC stars expected to be in the field include Justin Grant, Kevin Thomas Jr., Dave Darland, rookie sensation Tanner Thorson, C.J. Leary, Chris Windom, Robert Ballou and Chase Stockon just to name a few. Watch for some local non-wing talent to take a run at the big payoff.

To further complement this show, the 358 Modifieds will chase a $3,000 to win payday in their 30 lap main event. Expected contenders include sixteen time Thunder on the Hill modified feature winner Jeff Strunk along with Duane Howard, a twelve time Thunder on the Hill winner and recent victor of the Bruce Rogers Money Maker at Grandview. Craig VonDohren, Kevin Hirther and Doug Manmiller are likely entries. The Modifieds will compete in qualifying events leading up to the 30 lap feature.

The Thursday night, April 22 NAPA Auto Parts Thunder Series event will get underway at 7:30 PM with the grandstand gates opening at 5 PM. Advance tickets are available by calling 443 513 4456. Please speak clearly and provide your first and last name and the number of tickets you need. Tickets may be paid for and picked up at the WILL CALL window on race night. Advance ticket holders may enter the grandstands at 4:30 PM. Advance tickets orders can be processed up to the day before the race. We apologize, but advance tickets will NOT be available on race day.