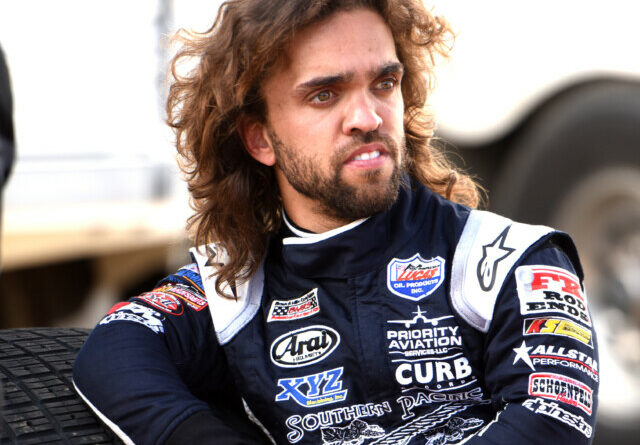 BECHTELSVILLE, PA June 19, 2021 . . . . . . One of the most personable competitors in dirt track racing, Rico Abreu, will make his return to the Grandview Speedway on Tuesday night, June 29 when the Pennsylvania 410 Sprint Speed Week Series presented by Red Robin invades “The Hill” as part of the NAPA Auto Parts Thunder on the Hill Racing Series. $10,000 is up for grabs to win the 40 lap Greg Hodnett Cup for the 410 Sprints. For the 358 Modifieds, they will also be on the June 29 race card with $3,000 going to the winner of their 30 lap feature. Gates open at 5 PM and race time set for 7:30 PM.

Rich Abreu of St. Helena, CA will be making the trip from the west coast, not only with plans of collecting the $10,000, but he would like nothing more than to add his name to the Greg Hodnett perpetual trophy. Hodnett, a six time Thunder Champion and nine time Thunder on the Hill feature winner is being remembered after losing his life in a racing accident in 2018.

The Hodnett Cup was fabricated from one of Greg’s many trophies, a base was added where names of future event winners will be engraved. As a perpetual trophy, it will be available on race day for Victory Lane celebration, the winner’s name will be added along with the event date, and the trophy will be on display year-round at the Eastern Museum of Motor Racing at the Latimore Valley Fairgrounds. Aaron Reutzel was first to win the Hodnett Cup in 2019 and last year, it was Kyle Larson who took the victory in the 2020 Thunder on the Hill Speed Week event at Grandview Speedway.

Rico Abreu is loved by the fans as he is an entertaining individual and great race car driver. Just some of his accomplishments include the 2012 USAC National Midget Series Rookie of the Year Honor and in 2014 he was the USAC National Midget Series Champion. That same year he was the Belleville Midget Nationals Champion. In 2015 and 2016 he took top honors in the Chili Bowl. Rico also competed in over twenty-five NASCAR Camping World Truck Series events. In a winged 410 sprint car, he has numerous wins sprinkled across the United States.

But when it comes to the sometimes wicked and tricky one-third mile high banked Grandview Speedway, luck has not always been on his side. Like many drivers, Rico is challenged with taming Grandview, which is not an easy task. He has established himself as a contender for the win, but it just didn’t happen as yet. Maybe it will all turn around, Tuesday, June 29.

“I always look forward to racing at Grandview, it’s one of my favorite tracks in the country, it’s fast and high banked.”. Rico continued, “I love spending time with the fans before and after the races”. This is an invite to you to stop by the Rico Abreu t-shirt trailer before the races (he can often be found there) or visit him in the pits after the races. Tuesday night, June 29, he would like to meet you in the Thunder on the Hill victory lane.

This event always brings out the best 410 Sprint drivers and some of the early pre-entries include previous Thunder on the Hill feature winners Freddie Rahmer and Danny Dietrich who will be joined by Brent Marks, Anthony Macri, Kyle Moody, Lucas Wolfe, TJ Stutts, Justin Peck and Buddy Kofoid just to name a few.

The 358 NASCAR Modifieds, the weekly division at the Grandview Speedway will also be part of this event, bringing two premier divisions to this venue on the same night, a spectacular Double-header. Modified qualifying events will lead up to the $3,000 to win 30 lap feature. Likely entries include Brett Kressley, Craig VonDohren, Jared Umbenhauer, Jeff Strunk, Duane Howard, Danny Bouc, Rick Laubach and Doug Manmiller to name a few.

Advance tickets are available by calling 443 513 4456. Please speak clearly and provide your first and last name and the number of tickets you need. Tickets may be paid for and picked up at the WILL CALL window on race night. Advance ticket holders may enter the grandstands at 4:30 PM. Advance tickets orders can be processed up to the day before the race.