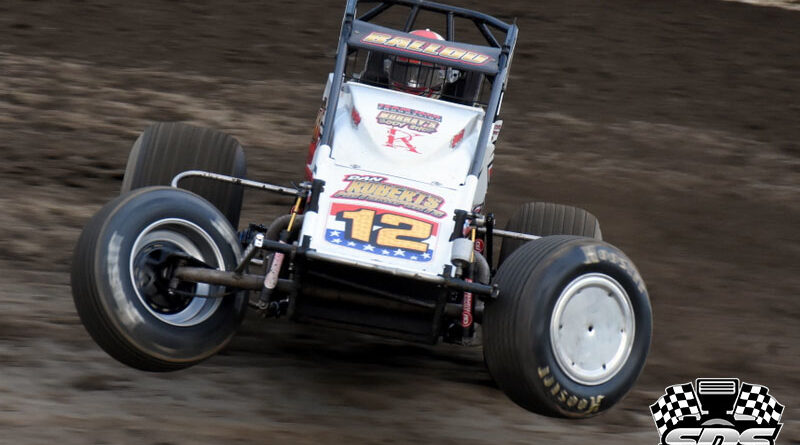 BECHTELSVILLE, PA June 8, 2021 . . . . . . Where’s the Madman ? In the circles of the AMSOIL USAC Non-Wing National Sprint Car Series can you only be talking about Rocklin, CA driver Robert Ballou.

No one will challenge that he earned that nickname for his hard charging and relentless on track driving style, and it did it very early in his racing career. And with the start of every USAC event, he lives up to that name. Where there’s a will, there’s a way and the Madman can/will make it happen. Ballou is one of about thirty non-wing national sprint car stars that will be heading to the Grandview Speedway on Tuesday night, June 15 when the Eastern Storm invades Pennsylvania for the $6,000 to win Jesse Hockett Classic. This NAPA Auto Parts Thunder on the Hill Racing Series event will offer a spectacular doubleheader with the Modifieds sharing the card with qualifying and a $3,000 to win 30 lap feature. Gates open at 5 and race time is set for 7:30 PM.

The “Madman” is out to shuffle the deck so to speak and mix it up so expect plenty of side-by-side action, some slide jobs and you just can’t help but to have some old fashion wheel-banging. In the April Grandview USAC show, Ballou started the feature deep in the pack. The second half of the race, the clocks showed Ballou as the fastest car on the Grandview Speedway high banked one third mile oval. Ballou rallied home with a third place finish. On June 15, the “Madman” is going all out for the win. To do that, he will have to stop Broken Arrow, AZ driver Brady Bacon, winner of the last four Thunder on the Hill USAC events.

“My confidence is up for this show on the hill as I got a handle on the track after that last show, I think we have it figured out”, said Ballou. “Maybe I did some dumb things before, but I have my qualifying program down better and the car is just comfortable for me”. Ballou continued, “I need to qualify better and put myself in a position to win, early in the race”.

And what about Grandview Speedway? “I love the place and its’ unique characteristics like the tight turns in one and two with three and four corners a little more sweeping”. Ballou added, “I have to stay out of the fence keeping it between the inside guardrail and that outside wall”. Grandview Speedway is one of Ballou’s favorite tracks and he feels he has the goods to stop the Brady Bacon domination at Grandview.

The USAC non-wing racers really do spice up the on track action. The wheel-to-wheel racing can sometimes be viewed as a contact sport! These drivers are very respectful with each other but they won’t give an inch. Often, it takes a slide job to make a pass! If you’ve never seen a USAC Non-Wing National Tour event, plan to be at Grandview Speedway Tuesday night, June 15. In addition to Ballou and Bacon, expect Kevin Thomas, Jr., Tanner Thorson, Logan Seavey in the Baldwin #5, Jake Swanson, CJ Leary and local drivers Briggs Danner, Tim Buckwalter, Alex Bright and Steven Drevicki. Anyone of these locals could pull off the upset to win a national tour event.

The 358 Modifieds will share the spotlight with qualifying events leading up to a 30 lap feature paying $3,000 to the winner. Likely contenders for the event include red hot Brett Kressley, Craig VonDohren, Duane Howard, Jeff Strunk, Rick Laubach, Danny Bouc, Ryan Godown and Jared Umbenhauer just to name a few.