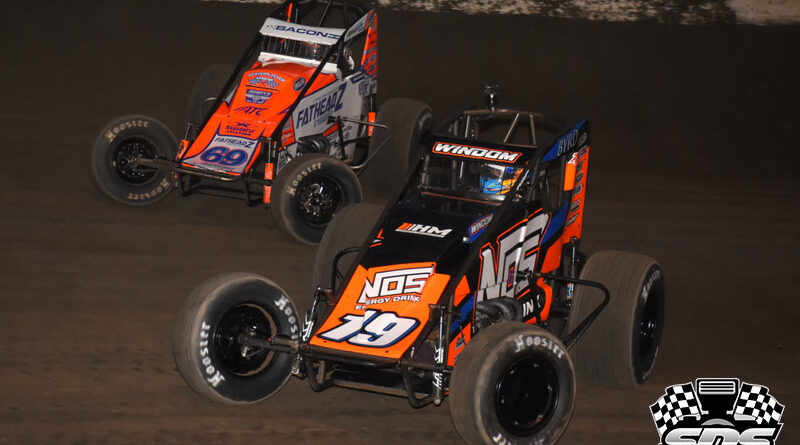 USAC NON-WING SPRINTS EASTERN STORM TO OPEN AT GRANDVIEW IN THUNDER ON THE HILL DOUBLEHEADER WITH MODIFIEDS TUESDAY NIGHT, JUNE 15

BECHTELSVILLE, PA June 5, 2021 . . . . . . The AMSOIL USAC Non-Wing National Sprint Car Tour’s Eastern Storm will open at the Grandview Speedway on Tuesday night, June 15 as the NAPA Auto Parts Thunder on the Hill Racing Series continues. The USAC gang certainly knows that rooster tails, slide jobs and some wheel banging are just part of the journey to win the 40 lap Jesse Hockett Classic paying $6,000 to win. Joining the USAC National Stars will be the popular 358 modifieds taking part in qualifying leading up to the $3,000 to win 30 lap feature. On race night, gates open at 5 PM and race time is 7:30 PM.

The USAC Eastern Storm was organized way back in 2007 when Bruce Rogers and Bob Miller approached USAC about a return to Berks County. Levi Jones won the inaugural Eastern Storm that marked the first USAC event in Berks County since Paul Pitzer took the USAC win at the Reading Fairgrounds in April of 1979. Since 2007, Grandview has opened the Eastern Storm annually, presenting fourteen events.

The USAC non-wing racers really do spice up the on track action. The wheel-to-wheel racing can sometimes be viewed as a contact sport! These drivers are very respectful with each other but they won’t give an inch. Often, it takes a slide job to make a pass! If you’ve never seen a USAC Non-Wing National Tour event, plan to be at Grandview Speedway Tuesday night, June 15.

The story line heading into Grandview will have all eyes on “The Macho Man” Brady Bacon from Broken Arrow, OK who will be chasing his fifth consecutive win in a Thunder on the Hill event at Grandview. Only Brady Bacon and Greg Hodnett have accomplished winning four features in a row at Thunder on the Hill. The USAC National Sprint Car Tour feature event will have some drivers looking to stop the Bacon win steak include Kevin Thomas, Jr., Robert Ballou, Tanner Thorson, Jake Swanson, CJ Leary and local drivers Briggs Danner, Rick Buckwalter, Alex Bright and Steven Drevicki. Don’t count out any of these local non-wing stars!

The 358 Modifieds will share the spotlight with qualifying events leading up to a 30 lap feature paying $3,000 to the winner. Likely contenders for the event include Brett Kressley, Craig VonDohren, Duane Howard, Jeff Strunk, Rick Laubach, Danny Bouc, Ryan Godown and Jared Umbenhauer just to name a few.