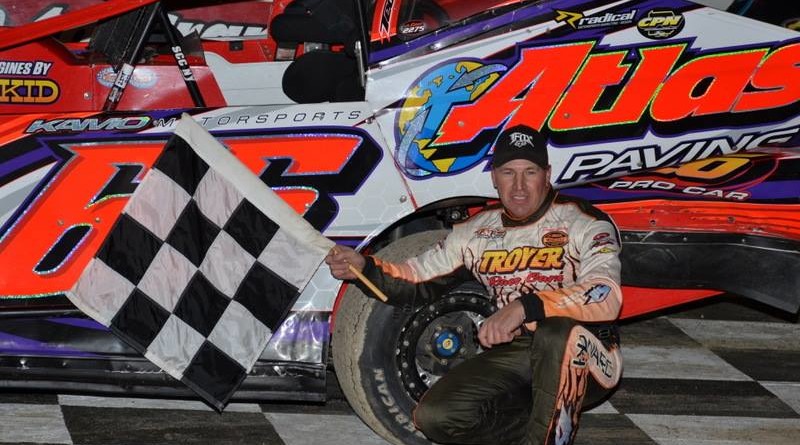 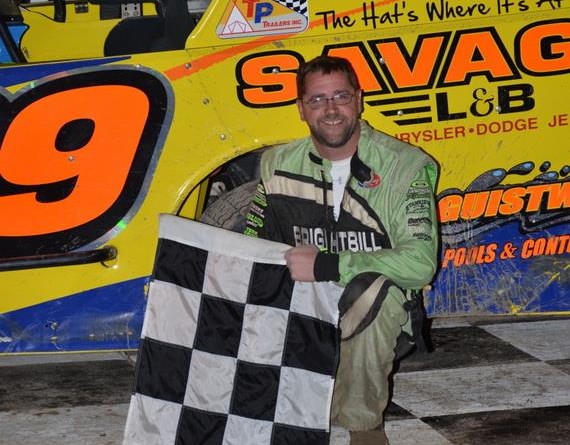 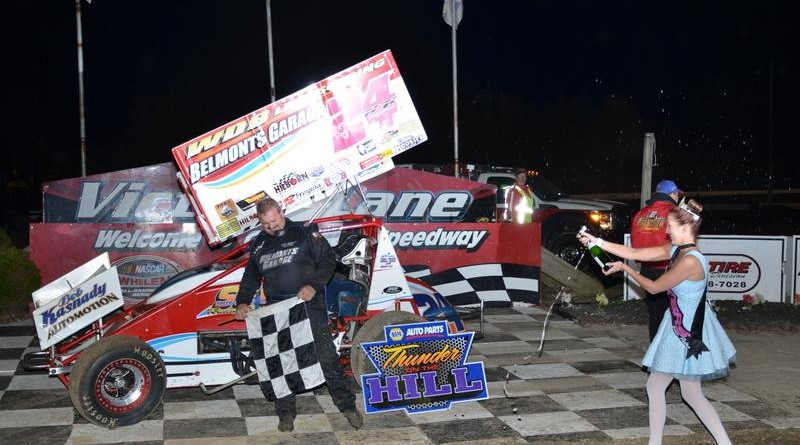 The fifteen year tradition of the NAPA Auto Parts Thunder on the Hill Racing Series Halloween Party returned to the Grandview Speedway with the MODS at the MADHOUSE triple header on Saturday night. When the Halloween treats were finally collected, it was Oley, PA driver Duane Howard who won the 40 lap $5,000 to win Modified feature as Brad Brightbill won the sportsman feature with Mike Haggenbottom winning the TSRS Sprint car feature event. Ninety-two cars took part in the action as a strong crowd turned out on cold and windy night.

In the 40 lap MODS at the MADHOUSE feature event, Brett Kressley was the early race leader, taking the top spot from pole sitter Danny Creeden. Ryan Watt, Billy Pauch Jr and Kevin Hirthler followed to make-up the top five as the field crossed the line on lap five. On lap nine, the caution was displayed for Ray Swinehart. When green flag racing resumed, Ryan Watt powered into the lead followed by Kressley and Pauch. Watt remained the pace setter with Billy Pauch Jr. now in the chase and in a position to challenge for the lead.

Jeff Strunk was on the move, racing in third followed by Duane Howard and Kressley as the field passed for the halfway sign. Watt held off Pauch until lap twenty-three when Pauch made the move to take the lead. Following Pauch was Howard, Watt, Strunk and Kressley.

Howard began reeling in race leader Billy Pauch Jr. and on lap thirty, Howard was on the rear bumper of Pauch and challenging for the lead. Slower traffic was ahead of the race leaders and Pauch was lapped cars. The battle went on for the lead.

The turning point of the race took place on lap thirty-six, as Pauch and Howard were in a side-by-side run for the lead, Pauch slowed and it appeared that he broke, with his car nearly coming to a stop in turn two. The caution was displayed and shortly after, Pauch regained power. The yellow was displayed for Pauch so he was required to restart at the rear of the field.

This advanced Duane Howard to the lead followed by Ryan Watt, Jeff Strunk, Craig VonDohren (who started 19th) and Brett Kressley. At the drop of the green flag, Howard was on top with Watt trying to hunt down the leader as Jeff Strunk and Craig VonDohren were in the thick of the battle with just five laps remaining.

Howard maintained his lead to win the inaugural running the MODS at the MADHOUSE followed by Jeff Strunk, Ryan Watt, Craig VonDohren and Rick Laubach driving the Glenn Hyneman 126. Billy Pauch Jr who brought out the caution on lap thirty-six and restarted at the rear of the field, worked his way back to a solid tenth place finish. Doug Manmiller, winner of the third heat race did not start the feature due to a rule infraction with the motor. Craig VonDohren was forced to run the consolation after losing a wheel during the running of a heat trace.

A twenty-four car starting field answered the call for the twenty-five lap Sportsman feature. Joe Funk led the first lap with Brad Brightbill taking the lead on lap two. Brightbill was challenged numerous times by Jorden Henn and later Ryan Lilick was chasing the race leader. At the halfway point of the event, Brightbill remained the leader followed by Ryan Lilick, Henn, Craig Whitmoyer and Funk.

Brightbill easily handled the competition and with five laps to go, he maintained a comfortable lead. Brightbill took the win over Ryan Lilick, Craig Whitmoyer, Jorden Henn and Brett Kressley.

The TSRS sprint car feature was the final event of the evening and Tim Tanner was the leader at the drop of the green flag after two previous attempts to start the 25 lap feature. After the feature got started, the twenty-five lap main ran non-stop to the checker flag. Leavittown, PA driver Mike Haggenbottom caught Tanner on lap seven and one lap later, Haggenbottom was the new leader. Haggenbottom established a solid lead but deep in the pack Kevin Nagy, David Brown and Adam Carberry where heading to the front. Nagy and Brown advanced to third and fourth and began chasing down Tanner.

In the closing laps, slower cars were now playing a factor as Tanner inched closer to Haggenbottom with Nagy and Brown reeling in Tanner. Haggenbottom rallied home the winner. In victory lane, Hagenbottom was thrilled that after twenty-five years, he finally won a feature at Grandview Speedway, and he did it in convincing style. Tanner finished second followed by Kevin Nagy, Dave Brown and Adam Carberry.