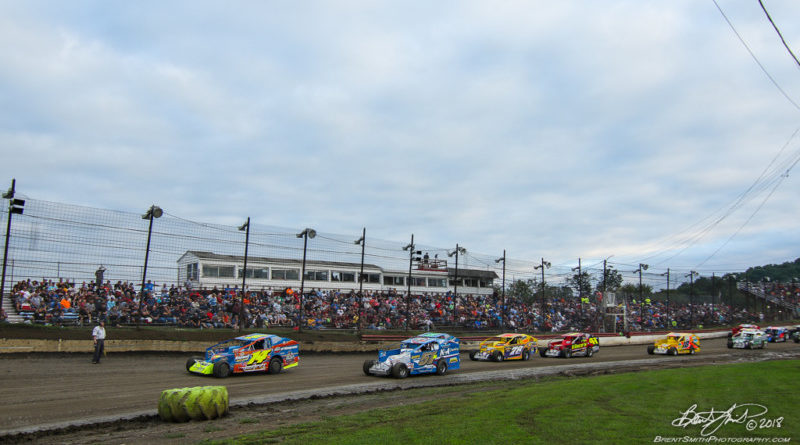 $5,000 TO WIN, $500 TO TAKE THE GREEN IN 22ND ANNUAL 40 LAP MODIFIED TRAFFIC JAM, SPORTSMAN & SPRINT CARS JOIN THE SCHEDULE
BECHTELSVILLE, PA (October 18, 2019) – After battling rain for the three previous Thunder on the Hill events, a bright and sunny day is planned for Saturday night, October 19 when the 22nd Annual Modified Traffic Jam will be the headline division joined by the Sportsman and MASS Sprint Cars. Race time is 6 PM with gates opening at 4 PM. $5,000 will go to the winner of the TRAFFIC JAM, $1,000 will go to the tenth place finisher and $500 will be paid just to start the main event.

General Admission tickets are $25 for Adults, $10 for children age 6 through 11, and kids under 6 are FREE! Pit Admission is $40, and a license is not required. A special rules package is offered to competitors, with both American Racer and Hoosier tires allowed for competition, along with either Big-Block or Spec Small-Block engine combinations. An event sheet with the complete pay structure, rules, and details is available at www.thunderonthehillracingseries.com

The popular Sportsman division is also on the card, competing for a $1,300 top prize for 25-laps of competition on ‘the hill.’ The same tire rule is in effect for the Sportsman – competitors are allowed to compete on Hoosier or American Racer rubber. Standard Grandview Sportsman rules are in effect and competitors are permitted to run sail panels. Full rules are available on the Grandview Speedway website.

The TRAFFIC JAM is part of the Mods at the MadHouse Halloween Party at Grandview. Fans are invited to come dressed for the occasion, Halloween costumes will be popular attire for the night with awards going out to best dressed for children and adults. Please expect some Halloween candy and of course, this night always provides some tricks and treats along the way. The NAPA Auto Parts Thunder on the Hill Racing Series Halloween Party has been a staple of the Grandview Speedway schedule for over 16 years and will once again include the fan Costume parade. Race fans young and old are encouraged to dress in costume to be eligible for special Halloween prizes.

Advance tickets are available by calling 443-513-4456. Please speak clearly and leave your name and the number of tickets you would like. Tickets may be paid for and picked up at the Will Call Window on race night after 3:00 PM. Advance ticket holders may enter the grandstands at 3:30 PM, one-half hour before general admission tickets going on sale at 4 PM. Advance tickets orders will be available until 9 AM on race day, Saturday, October 19 with general admission tickets go on sale at 4 PM.

NAPA Auto Parts continues their long run with the Thunder on the Hill Racing Series as the title sponsor joined by Levan Machine and Truck Equipment and GALCO Business Communications.

About Thunder on the Hill Racing Series
The brainchild of Grandview Speedway owner Bruce Rogers, special events promoter Bob Miller and local driving star Dave Kelly, the Thunder on the Hill Racing Series celebrates 30 years of the most anticipated events of the racing calendar year after year. In 136 events, over $4.5 million dollars has been divvied up among the area’s fastest racers. What started as a single 410 Sprint Car event in 1990 has blossomed to feature a variety of racing action including 358 Modifieds, USAC Wingless Sprints, All-Star Circuit of Champions, USAC Midgets, 360 & 410 Sprint Cars, Sportsman, Late Models, Midgets, Legend Cars, DIRTcar and ROC Modified events.

About Grandview Speedway
Grandview Speedway is a high-banked one-third mile clay oval, celebrating their 57th Anniversary season in 2019. The facility offers free parking, quality food at reasonable prices (be sure to try the french fries), a program book, Grandview Speedway and Thunder on the Hill race wear and great viewing from every seat in the house. Race fans may take part in the Inside/Out promotion, where you can sign up (no charge) to watch warm-ups from inside turn four. Race fans are also invited to victory lane following the racing program and, race fans may enter the pits after the races to meet the drivers. Be ready to enjoy the spine-tingling fireworks salute on the feature event parade lap.