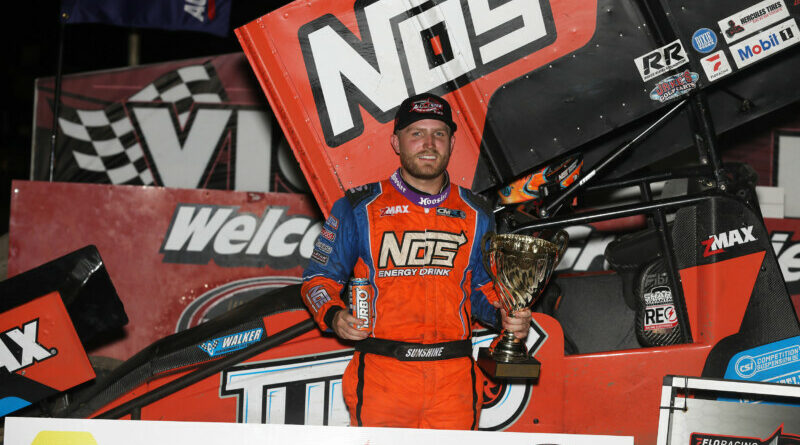 BECHTELSVILLE, PA (AUGUST 26, 2021) – NAPA Auto Parts Thunder on the Hill Racing Series returned to Grandview Speedway on Thursday Night for a 410 Sprint Car and Modified doubleheader. Tyler “Sunshine” Courtney picked up the 6th Annual Levan Machine and Truck Equipment Thunder Cup and Brett “The Threat” Kressley won the 358 Modified main event worth $3,500 in a single-lap shootout to the checkered flag.

A field of twenty-six 410 sprints and thirty modifieds filled the pit area on a hot, hot summer night that also offer the threat of rain all around the Bechtelsville speedway. The Pioneer Pole Building $1,500 first time Thunder on the Hill modified winner bonus remained unclaimed although Matt Stangle was in the hunt for the $5,000 first place prize after leading a good portion of the race. Stangle turned in a very impressive fourth place finish.

“Sunshine” an Indianapolis native scored the $6,000 winner’s share and the 6th Annual Levan Machine and Truck Equipment Thunder Cup trophy with a close win over Dillsburg, PA’s Anthony Macri. The two sprint cars touched as they charged off turn four in the final run to the checker flag.

“Anthony is aggressive and fun to race with, he ran me real clean. I almost gave that one away,” Courtney said of the second-place finisher and the contact they made coming down to the checkered flag. “It’s so good to get a winged Sprint Car win in Pennsylvania, it’s a good way to start our weekend.”

This All Star Circuit of Champions win marked Courtney’s eighth of the 2021 season, and his first Thunder on the Hill win – having competed for multiple years on ‘The Hill’ with the USAC Non-Wing Sprints.

Zeb Wise started on the front row of the 35-lap All Star A-Main alongside Macri and shot to the lead on the initial start. Wise set a rapid pace as the battle behind him heated up, three cars diced for the second position with Macri leading Tyler Courtney, and Justin Peck.

The leader, Wise, approached lapped traffic on the fifth-circuit but kept his cool switching lanes and making the best of a crowded race track.

Courtney charged passed the Macri Concrete No. 39M on the tenth-lap and set his sights on Zeb Wise.

With $6,000 up for grabs, Tyler “Sunshine” Courtney waited and watched making a move just prior to the halfway point – but Wise countered with a move of his own regaining the top spot.

Wise got into the turn four wall two laps later, forfeiting the lead to Courtney.

A close call on lap twenty-three saw two cars make contact. Devon Borden, aboard the Heffner No. 27 machine, shot across the racetrack directly in front of the leaders. Courtney stayed safe, but Wise just barely clipped the car, but was able to continue on.

Courtney dropped the hammer on the restart, with Macri charging into the second spot and Peck moving into the third position.

Macri closed in on Courtney as the final laps ticked away, patiently waiting to make his move.

All Star Circuit of Champions 410 Heat races were wont by Zeb Wise, Anthony Macri, and Kyle Reinhardt. Quick Time was set by Cory Eliason with a lap of 11.650, receiving a $150 bonus and wine from Clever Girl Winery. Anthony Macri won the dash earning the right to start on the pole and Tyler Ross was the winner of the B-Main.

Matt Stangle and Justin Grim led the field down to the green flag, swapping the top spot twice in the first lap. A bold three-wide move handed the lead to Jared Umbenhauer, with Grim and Stangle fighting for second.

Umbenhauer dropped into a rhythm that earned him a half-track lead over the rest of the field. Six cars battled for second running multiple grooves before the yellow slowed the field on lap eleven.

On the restart, it was Stangle taking the lead and maintaining control with Brett Kressley and Craig VonDohren following close behind.

Kressley made his move on lap 20, powering past Stangle into the lead.

Lapped traffic bunched the field directly in front of the leaders, with Kressley making contact – but continuing on while the lapped cars spun out, bringing out the yellow, and setting up a one-lap shootout for the win.

Kressley took the lead on the start, the checkered flag, and the $3,500 Thunder on the Hill Racing Series win. Umbenhauer came home in second, Craig VonDohren in third, Matt Stangle in fourth, and Jeff Strunk in fifth.

The NAPA Auto Parts Thunder on the Hill Racing Series returns on Saturday, October 16 for the Mods at the Madhouse Big-Block/Small-Block Modified Triple 20s and Sportsman event. For further information visit www.thunderonthehillracingseries.com

NOTE: A special Thank You to the hard working track crew and officials, as well as the All Star Circuit of Champions and Modified drivers who cooperated in moving the show along to beat the weather that in the area.